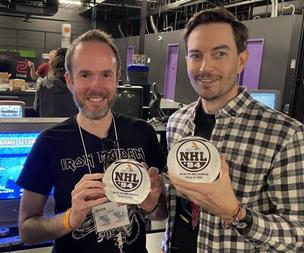 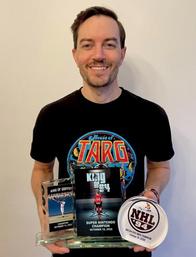 Scroll down for tournament pics​

WE ARE BACK LIVE!

It's been three years since our last live tournament. Players were itching to get to see each other in person and compete in a live tournament. We were at Waves Gaming, Home of Canada's First Esports Hub, where we held our 2019 tournament.

Friday, October 14, 2022 (evening): This was the first time we were able to have 2v2 tournaments in a live setting. Both Sega Genesis and Super Nintendo had 8 teams. Players could join the tournament as a team, or they could be as an individual and get paired up with another player.

The format was a two-game round-robin for seeding with the playoff bracket below. 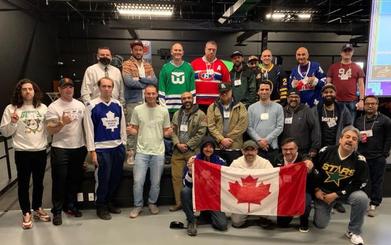 We started the day off with Sega Genesis. 36 players divided into 5 groups of 7 or 8 to each play 6 round-robin games (3 home and 3 away). It was exciting to see KGMan make his return. He hadn't played since the first King of 94, which he had won. Some competitors felt that because he'd been away for so long that he'd be rusty and not at the level he once was. He managed to dispel those rumours quickly by going 6-0 in his round-robin group outscoring his opponents 41-12 in the process.

We introduced a three-tiered playoff format. If you won 4 or more round robin games you would play in the King of 94 Bracket, 2-3 wins and you played in the Duke of 94 Bracket, 0-1 win got you in the (NEW) Puke of 94 Bracket. We had a little fun with the name. The trophy has Valeri Zelepukin on it and a member of the community, Fenty, used to call him "Puke". So we went with it. We also allowed players with 3 wins to choose if they wanted to move up to the King of 94 bracket, and some players opted to go this route.

The winner's side saw a couple of big upsets. Round two had Dantml7 (14th seed) defeat Kgman (3rd Seed) two games to one. Round three saw Szpakman (10th seed) defeat Corbettkb (2nd Seed) two games to zero. Kgman's day wouldn't end quickly, as he managed to fight his way through the loser bracket and make it all the way to the loser's semi-final. He lost in a thriller against Kingraph 8-7 and finished 4th. Kingraph would defeat SebetheLegend and move on to face Angryjay93. This is the fourth time they met in the finals from the previous 6 tournaments, with Raph having an edge in finals 2-1. However, both have won two King of 94 titles. Angryjay would win the final 3 games to 1 to become the first Three-time Sega World Champion!​

The Duke of 94 saw UltraMagnus (A sega NHL95 Guru) as the top seed entering the bracket. He would go undefeated throughout the playoffs taking down newcomer, Cobrakai, in the final.

The Puke of 94 final featured Stantanator, who admittedly said he did not play very well during the round-robin, going 1-5. His opponent was Segathon, another Sega 95 guru. Stantanator wins 4-3 in OT to take the trophy. Segathon, would play in three finals throughout the weekend. He also finished 2nd in the King of JAM (NBA JAM TE) and Darkside of 95 (Sega NHL95) tournaments.

Super Nintendo took place during the latter part of the day.

36 players divided into 5 groups of 7 or 8 to each play 6 round-robin games (3 home and 3 away). Unfortunately, three-time Champion, Mikail (aka kingof94) was unable to make the tournament. SNES still had a stack of players who could win it. Dangler, Koke_45, The Professor, Annatar, Kingraph, bobkudelski26 all headlined the list, but it was bob's name we would hear most over the weekend. Coming off wins the night before in SNES 2v2, and winning the King of Griffey (SNES Ken Griffey Jr. presents MLB), it would seem he was primed for a good run. However, his round robin bracket didn't go the way he wanted. Losses to The Professor and Temco Jon left him with a 4-2 record and the 11th seed in the King of 94 bracket.

In round two, BobKudelski26 would defeat 6th seed AngryJay93 5-1 and 3-1, then 3rd seed KingRaph in Round 3, with scores of 2-4, 6-3, 5-4, and then 2nd seed, The Professor, in round 4 with scores of 3-2 and 2-1. He would then meet the number one seed and reigning King of 94 Champion, Dangler,  in the winner's bracket final. Dangler would make it clear why he's defending champ by defeating Bobkuldelski26 winning both games in the best of 3, by scores of 8-2 in both games.

Bobkudelski26 would then drop down to the loser bracket final to play against Koke_45 in a best of 3. Koke took the first game 5-3, but Bob managed to come back and win game two (3-0) and game three (3-1) and we move back up to face Dangler one more time in King of 94 final.

Dangler starts off the best of 5 with a 1-0 series as per the format since he hasn't lost a series all playoffs. We wondered what kind of final we would have. Would it be over quickly like the winner's final series?

It turned out to be a classic. BobKudelski26 won game two 4-2 and game three 6-4. Dangler would take game four, 5-2 to set up a winner take all final game! In a game that wouldn't disappoint, bobkudelski26 wins 3-2 to win his first ever championship!

Bobkudelski26: When the final whistle sounded, it took a while for things to set in. I felt like there was no way that it was actually over, that I actually ended the tournament with a win. It took a while. I STILL don’t have the full perspective on what happened. To beat the two GENS giants, and three of the top five SNES players, is pretty huge. This field of competitors, even without Mikail, was outstanding. I have been wanting to win one of these badly, ever since the first was announced in 2015. This game, this hobby, is admittedly a big part of my life, as it probably is for you if you're reading all this. So, it feels GREAT to be King! I’m so fortunate to come away from the weekend fully satisfied. It’s rare in life that things work out so well so I gotta savour this.

​The SNES Duke of 94 final featured the number 4 seed, Halifax, and the number 6 seed, StreetMage. StreetMage would jump out to a 5-0 lead in the final. Halifax would mount a comeback but it was not enough as the final score was 5-4 with StreetMage taking home the trophy!

2. Bobkudelski26 with his King of Griffey trophy, SNES King of 94 trophy and SNES 2v2 trophy

8 and 9. Competition in progress

10. ​We were fortunate to have Christopher, an indie game developer, demo his game "Hockey Heroes" and gave everyone an opportunity to give it a shot! Follow him on Twitter @odrhockeyheores. One of his tweets was priceless. Screenshot below. 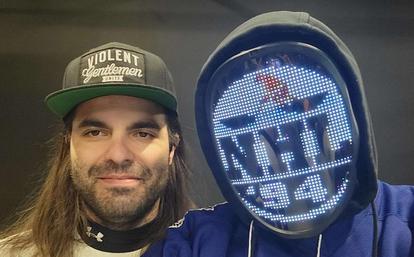 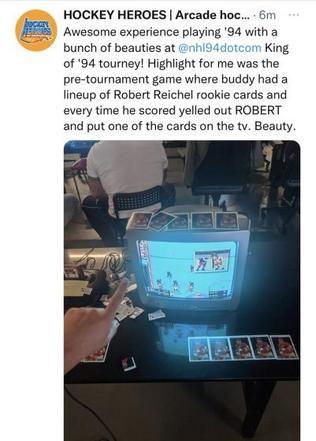 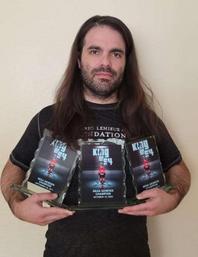 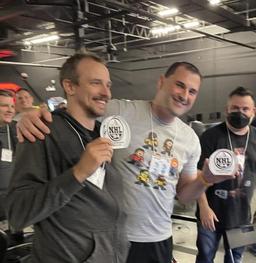 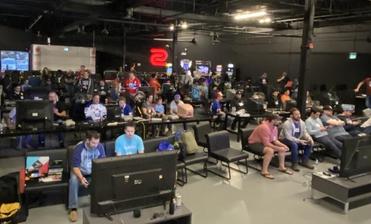 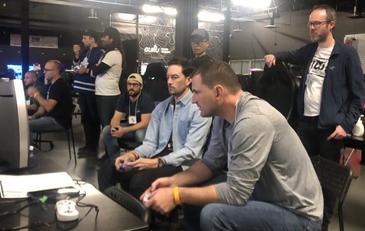 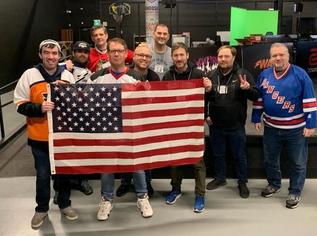